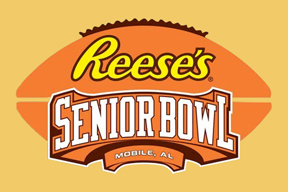 Center for Independent Futures participant David Kromelow has been dreaming for three years about attending the Senior Bowl, a post-season college football all-star game played each January in Mobile, Alabama. The event showcases the best NFL Draft prospects of those players who have completed their college eligibility. The game has consistently been played on a Saturday in January, and the week-long practice that precedes the game is attended by key NFL personnel (including coaches, general managers and scouts), who oversee the players as possible prospects for pro football. Last year, David just didn’t feel it. This year he achieved his Senior Bowl dreams.

How David Made It Happen

“I wanted to go because it would be a great experience to network and interact with people in the NFL and in the journalism business,” explains David. To get himself ready, David spent a lot of time over the course of the past year practicing his craft by hosting a weekly podcast and reaching out to guests via social media. He worked hard on his podcast and website to push out content and to stay on top of all the important NFL news, and to connect with others in the industry.

Feeling more comfortable, in tune with college football, and armed with information to interview journalists, prospects, NFL media relations, and PR teams, David headed for Mobile. “It is hard to describe because it was such an amazing experience,” relates David. “I flew in on Monday, checked into the hotel, and attended an introductory media hosted event. I was able to hit the ground running and interview many prominent reporters.” 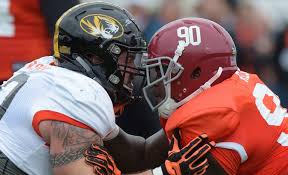 introduction press conference. Shaquem Griffin, a University of Central Florida defensive player, and very unique player in the football world given the fact that he lost one of his hands due to a birth defect, was present. David posed this question: “What advice would you give kids with any kind of disability?” Griffin responded with a powerful statement…“It’s not a disability unless you make it one.”

“Hearing his answer made me think, this guy is wise beyond his years and it would be a shame if he didn’t get a shot in the NFL. He has the mental toughness to be successful and to defy the odds – because he has been doubted his whole life. It was an inspiring moment.”

Living Out His Senior Bowl Dreams

After the first day, David met two of the best NFL local beat reporters. He learned that conducting a brief 2-5 minute interview with notable guests is a great way to collect large amounts of quality content and information. “I had the chance to interview Albert Breer, an American football journalist and reporter for Sports Illustrated‘s MMQB, and took the opportunity to ask him a few questions about the latest buzz in the industry,” David shares about his Senior Bowl dreams experience. “It was awesome! Unfortunately, his phone went off and we weren’t able to finish the interview.” David muses, “I have improved a lot in the past few years in my understanding of social cues, and the experience with Albert demonstrated it.” 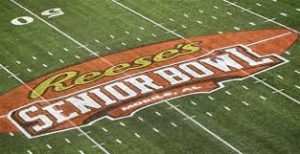 Center for Independent Futures Life Skills Tutor, Jake Rohde, has been impressed with David’s determination and drive. “It has been great to support David, and to watch him go after his Senior Bowl dreams. He’s an inspiration!” David hopes to attend future Senior Bowls and similar events to keep building contacts, making connections, and boosting his profile. His ultimate goal is to develop a career in sports reporting. “I am fortunate to have my parents, friends, and family supporting me at every turn,“ he says. “Their constant encouragement motivates me to keep the train rolling!”

So, what does it feel like to be living the dream? “The best way I can put it is that I felt like a kid in a candy store AND the candy there was even sweeter than expected.”

You may also find David’s podcasts on iTunes, the Apple Podcast App, Spotify, or wherever you listen to podcasts. Search “Sports Krunch” to find the entire podcast listing.