For almost 20 years, Independent Futures has been a haven for individuals with disabilities and their families navigating the adult world after public school supports end. In Illinois, we rank 47th nationally in funding for services that promote community inclusion and 47th in community employment. Families are left not knowing where to turn with a state-funded disability services system that lacks resources and opportunities for real choice and self-determination.

Independent Futures provides an answer. Adults with disabilities benefit from planning, training, inclusive housing, and a range of support services that they choose – to achieve full, active, socially engaged, and independent lives.

Before the pandemic, I was working from 10 am-2 pm in the dish room of Old Orchard Junior High. That’s where we wash dishes and there are big machines. I worked there for a total of 4 years already, and I like it. 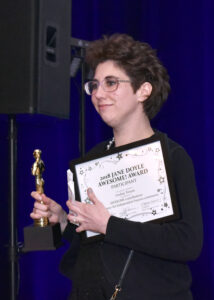 hours, and I get off holidays and the summers. I found this job by looking it up in Indeed. I applied for it, got an interview, and got hired right away.

Before the pandemic, it was difficult and rushed because there were a certain number of things I had to get done on time each day. I had to clean the dishes all by myself, put them through the dish machine, make sure they were dry and take them up to the front of the cafeteria to be served.

I kind of liked it – but it was hard at times. I really liked getting to know the kids. That was fun.

When the pandemic happened, I did not work. One of the supervisors told us that the school was going to be closed for an amount of time. I thought it might be less time, but it turned out to be longer.

This fall, it was kind of confusing. I didn’t hear from them until the last minute. I was missing work, but I was also glad to be staying safe. I felt both things. Because when I was off I got to do the things I needed to do, catch up on things. And spend time with my friends and people I hadn’t seen because I worked so much.

But I missed working, and I really missed the money to do the things I wanted

I started back to school this past August. I was relieved that I got my job back!! Also, it threw me off guard because I wasn’t sure what was going on.

Now I only do dishwashing in the sinks which is much easier because it is only in one area. And I get to work in the kitchen with my co-workers instead of by myself which is good because I get to be around my coworkers. I like to be around people.

But now, it can get to be too much. I’m tired and I don’t have much energy for fun activities after work. But also I’m getting money that I need to buy the things that I like to get.

I’m staying with this job for another year.  Maybe in the future, I’d like to work with people or kids.  I like to help and volunteer, too.

I love my dog, Sandy.  She came here in 2016.  She has just turned 6 years old.  She came from a rescue group out of Houston. It’s called Patty’s Paws.  They foster and match people with their dogs.  The best part of having Sandy is her company and I like the attachment with a dog.  She’s good while I’m at work.

Lindsay Tonyan has been a participant at Center for Independent Futures since 2009. She is originally from McHenry, Illinois and she attended the PACE program in Evanston in 2003. After graduating from PACE, she lived on her own for a few years, then joined Independent Futures which she credits as “helping (her) focus on skills and goals in (her) life.”