Capabilities, courage, and a little support.

“Where do you want to live?”

This wasn’t an easy question for Sherri and Steve Sener to ask Mike, their then 23-year-old son. The family was preparing for a move to California, and when they heard Mike’s answer, the family needed to find courage and additional support.

“I want to stay in Illinois and live in Evanston,” Mike said. He had been living on his own after graduating from a post-secondary education program, but the future was uncertain with the rest of the family moving across the country.

Thankfully, Center for Independent Futures was just a few blocks away and ready to provide support. As a first step, the family collaborated to complete our Skills Inventory, which suggested ways Mike could reach his potential. Mike was paired with Center for Independent Futures Life Skills Tutor Rob Larson, who used the inventory as a blueprint to for their work together.

When Rob began working with him, Mike’s unhappiness manifested in negative behaviors. “At first, Mike wouldn’t talk to me directly and oftentimes would ignore my suggestions. All my efforts were hitting an invisible wall,” Rob recalls. Looking for a solution, Rob studied Mike’s interests and tailored his teaching to engage Mike in the learning process. And that led to a breakthrough. 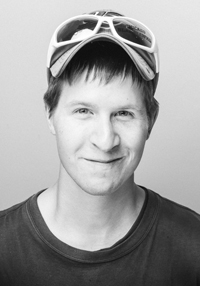 “I was trying to teach Mike how to clean. We put on some music from ‘Grease,’ and then I pulled out my phone to record Mike dancing and cleaning to the music,” Rob shares. “When I showed Mike the video, he loved it, and he saw himself in a new light.”

Mike proceeded to dance, clean, and sing, impersonating John Travolta. “I was surprised that this was the same guy who had scarcely spoken a word to me for the first month of tutoring. Mike was so expressive, and we had found a new way to communicate,” Rob explains.

After this success, however, a new challenge arose when Mike’s roommates decided to pursue a dream to own a condo. He needed a new living arrangement, but his parents once again questioned whether Mike could live on his own.

He was well-connected through his sports, friendships, and job at Dairy Queen, but none of that could continue without a secure home base. With help from Center for Independent Futures, Mike and his family found an affordable apartment near friends, public transit, and our office.

“Would it be safe?” Sherri wondered. “When we asked Mike, he said he was ready. So we had no choice but to trust and see how things would go. It was so comforting to know that Mike would be meeting with the Center for Independent Futures staff on a weekly basis to ensure that he was succeeding in his new place.”

And so, a new journey began. Mike moved into his apartment and began mastering more skills, developing his independence, and building self-confidence. To celebrate the new beginning, Mike and Rob created a movie about Mike’s new place.

“Mike chose the music, and I filmed him doing all the tasks needed to live on his own,” Rob describes. “The film solidified all the skills I had been teaching Mike, as he impersonated himself. I have been so moved by the transformation I witnessed and had the privilege to support.”

Mike’s life today is a testament to his capabilities, and to his parents, who were not afraid to ask their loved one, “Where do you want to live?” They found the courage to take the path, with the support of Center for Independent Futures, toward a more independent and full life for their son.